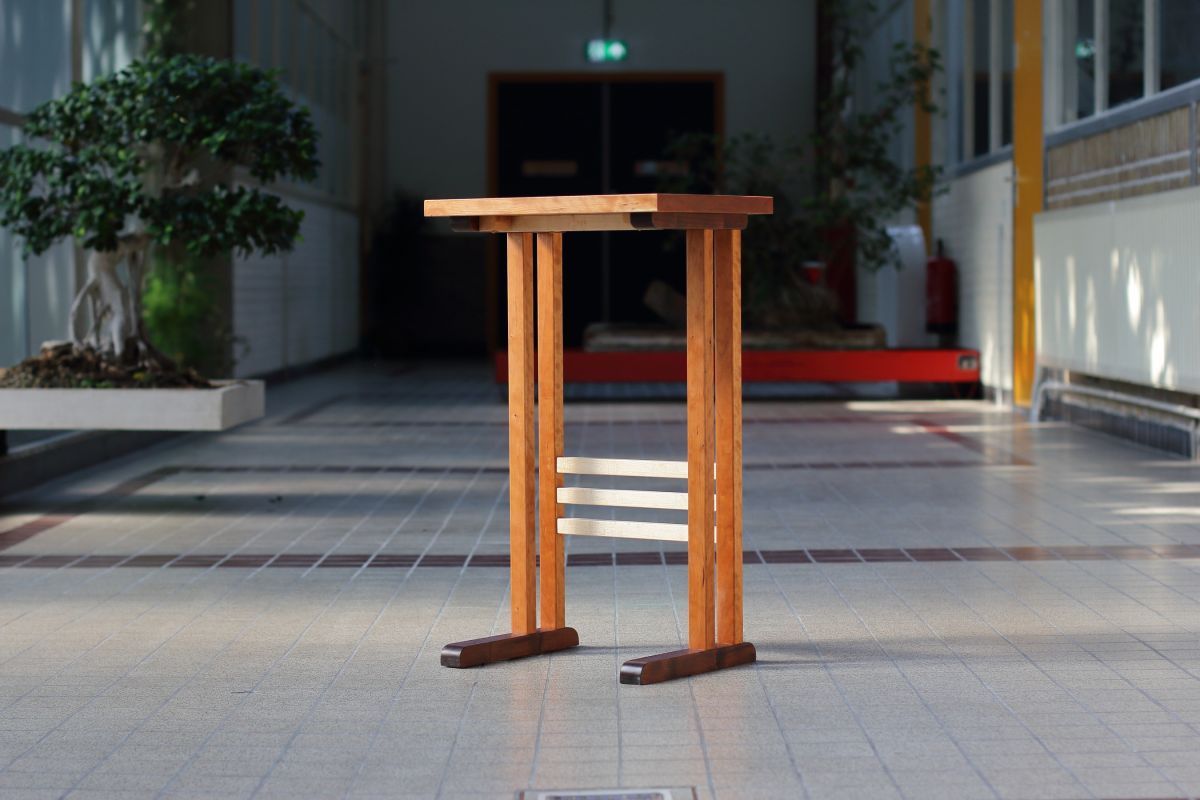 Zestig is a side table made for a client as part of  our bespoke service. It is not available for purchase, but may serve as a model for a custom piece specially for you. Zestig, meaning ‘sixty’ in Dutch, was made as a gift for the 60th birthday of a loved one.

The side table has an airy design and combines three types of wood: cherry, walnut, and maple. The table top features a striking wavy grain figure, giving the side table a special touch. The top rests on equally alluring legs, displaying the contrasting colors of the cherry, walnut and maple trio.

Zestig also features some of Espenaer’s signature design marks, such as the triplet sticks and the parallel legs.

Zestig has a minimalist base consisting of cherry parallel legs joined by maple rails in the style of Espenaer’s signature triplet sticks (as seen in Geraamte and Allegaar too). The legs fit into walnut feet at the bottom and into table top supports–we might call them aprons–at the top. All components connect to another with handcut blind mortise and tenon joints.

The table top is made out of beautifully figured cherry, oriented in a way to emphasize the fluid lines of the wood grain.

The table top rests on the walnut aprons and is attached with cleats made out of steamed beech. This allows for the seasonal movement of wood.

Zestig was entirely crafted by hand using traditional hand tools and techniques. The table top and legs were cut from a single board of cherry with a Western-style saw and subsequently flattened and smoothened with a set of Western-style hand planes.

The triplet sticks and rails between the legs were crafted in a similar fashion out of maple. The feet and aprons were cut from a piece of walnut that we have acquired from a retired woodworker who made wooden barometers.  The ends of these components were rounded using a combination of saws, hand planes, files, and sandpaper. The rounded cleats were made out of steamed beech in a similar way.

The mortise and tenon joints in Zestig were all cut by hand using a set of Western-style chisels and dovetail saws.

The side table was finished with three coats of boiled Tung oil.