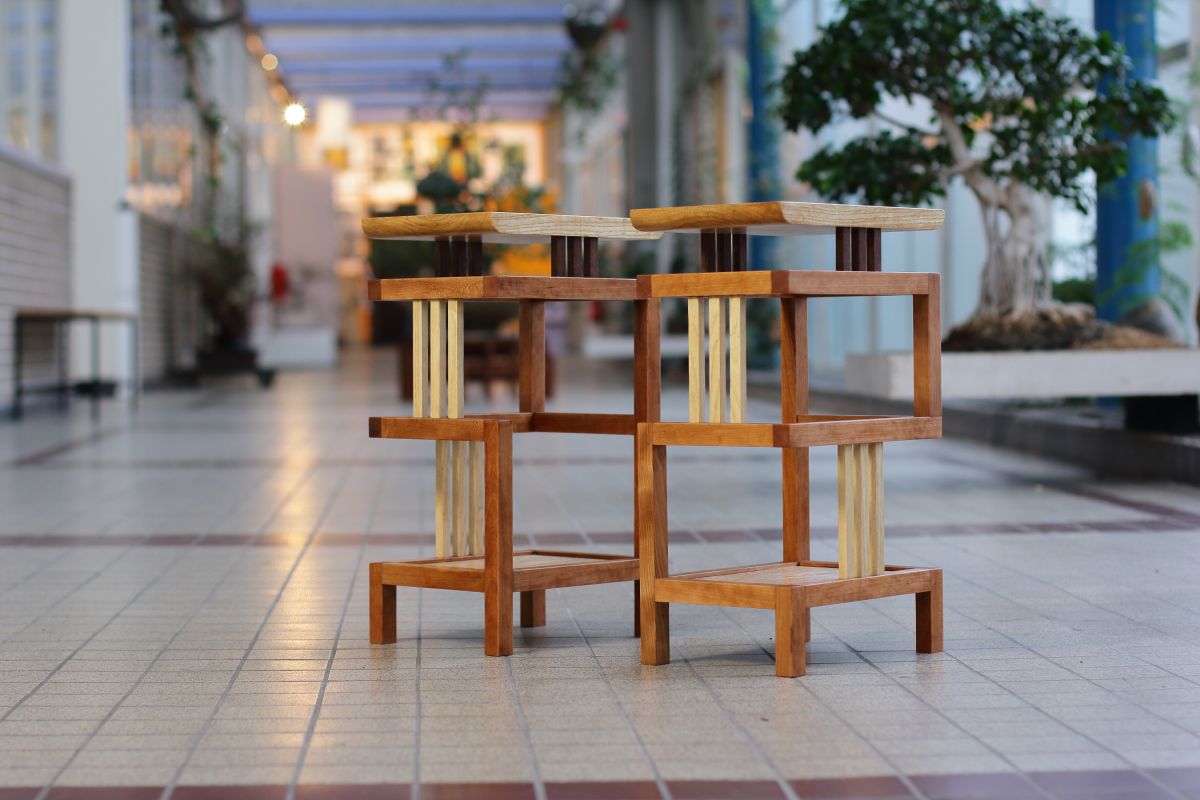 Façades is a set of two loudspeaker stands made specially for a client as part of our bespoke service . It is not available for purchase, but may serve as a model for a custom piece specially for you.

Each stand is composed of an asymmetric framework with a surface in the bottom part and one on top. As a result of this asymmetry the stands looks different from different points of view, or to put it differently, it has different façades. This distinguishing features is what gives Façades its name.

Even tough Façades is intended as a set of loudspeaker stands, it was designed in such a way to allow other possible uses too, like as side tables or as night stands. This was a conscious choice to extend the lifespan of the stands with durability and sustainability in mind. Even if the clients decide to stop using their speakers, Façades may continue to serve them in other ways.

Each stand is made up of an asymmetrically shaped framework with two surfaces. One surface is located in the bottom part and may serve as a place to put bottles, glasses or decorative items, whereas the other is on top and is meant to support the speakers, but may otherwise serve as a table top. Both surfaces are made out of solid ash and were selected for their beautiful pattern.

The framework itself consists of slender styles and rails made out of cherry. They connect to one another using blind mortise and tenon joints. In specific parts of the framework, the cherry styles and rails that one would expect are intentionally left out, producing the mentioned asymmetrical shape. Espenaer’s signature triple sticks, made out of ash, connect the rails at the points where the regular styles are missing.

The top surface is attached to the framework with a shorter, walnut version of the signature triplet sticks positioned in the middle, making it appear as if the surface is partly floating. In the bottom part the surface is fitted inside the frame using a groove and tongue joint.

Façades was entirely crafted by hand using traditional hand tools and techniques. The styles and rails were cut from a board of cherry with a Western-style saw and subsequently flattened and smoothened with a set of Western-style hand planes. The slender triple sticks were cut in a similar fashion out of ash and walnut. All woods are certified and are acquired via a hardwood dealer located in our hometown Amsterdam.

The mortise and tenon joints were all cut by hand using a set of Western-style chisels and dovetail saws. The groove and tongue joint was cut with a combination plane. The rounded ends of the top surface were handshaped using a combination of tools, including a saw, a block plane, and a file.

Façades was finished with three coats of boiled Tung oil.