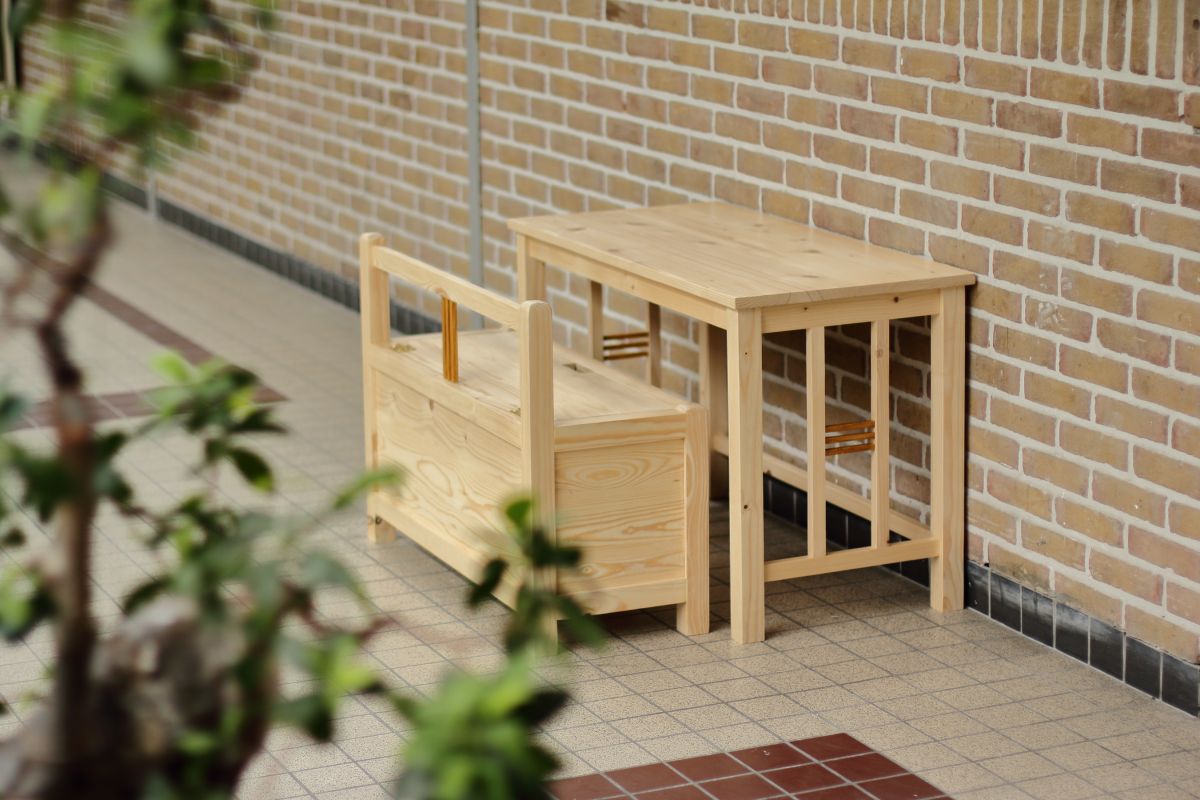 Laurier is a children’s desk and bench combination made for a client as part of our bespoke service. It is not available for purchase, but may serve as a model for a custom piece specially for you. Laurier was named after the client’s son, for whom the desk and bench are meant.

Laurier consists of a desk and a bench that are made to fit one another, but may each also be used as pieces on their own. The combination aims to demonstrate that practical purpose and elegant design do not necessarily exclude one another. Laurier has a self-evident practical purpose as a place for the child to play, draw, and write, and also includes a practical built-in storage space. Yet, the set also has stylish looks and would not look out of place next to cabinets like Terrassen or side tables like Geraamte.

Laurier’s desk features a simple and open design. A table top made of reclaimed wooden boards sits on top of a frame of the same material. Stretchers, rails, and aprons fit into the legs through blind mortise and tenon joints. The table frame features two of Espenaer’s signature design elements: the ‘parallel legs’ on the left and right side of the table, and in between those, the triplet sticks. To add a touch of contrast to the piece, the triplet sticks were given an oakish, lightbrown hue.

The bench has a closed, panelled design, which allows it to function as a chest too. Reclaimed wood bars connect to one another with blind mortise and tenon joinery to form the frame of the bench. Panels made out of reclaimed wood boards fit in between the hollows of the frame using tongue and groove joints. The legs at the back end of the bench stick out and are connected by a horizontal bar, thus forming the back of the seat. Triplet sticks add additional strength to the back.

The seating area is composed of a board that simultaneously functions as the lid of the storage space beneath. The lid is connected to the bench with hinges and has a carved out opening on the front side that serves as a pocket pull.

The bench has rounded peaks, another Espenaer feature, both at the back and in the front. The peaks are not as pointed as those of Geraamte, Terrassen, Vrede, however, due to the fact that Laurier is a child’s desk and bench and sharper peaks would constitute a potential safety concern.

Laurier is entirely crafted by hand using traditional woodworking techniques and tools. The legs of the desk and the bench were both cut from reclaimed wooden bars, sourced from the logistics sector. The remaining frame elements, the desk top, the bench seat, the panels in the bench, were cut from reclaimed wooden boards from the same source. The cutting was done using a combination of Western-style hand saws and a Japanese ryoba saw.

The mortise and tenon joints in both the desk and the bench were cut using a tenon saw and a set of bench chisels. The grooves in the frame and the tongue of the panels were made using a combination plane.

The most delicate part of the crafting process was making the triplet sticks. These sticks too were cut from the same source material and required time and effort to turn them into their typical slender shape. They were joined to the parallel legs using tiny mortise and tenon joints.

The peaked legs of the bench, both the long ones at the back and those on the front, were all individually rounded using a combination of block planes, spokeshaves, files, metal scrapers, and sanding paper.

The entire piece was finely smoothed using metal scrapers and finished with three layers of varnish.