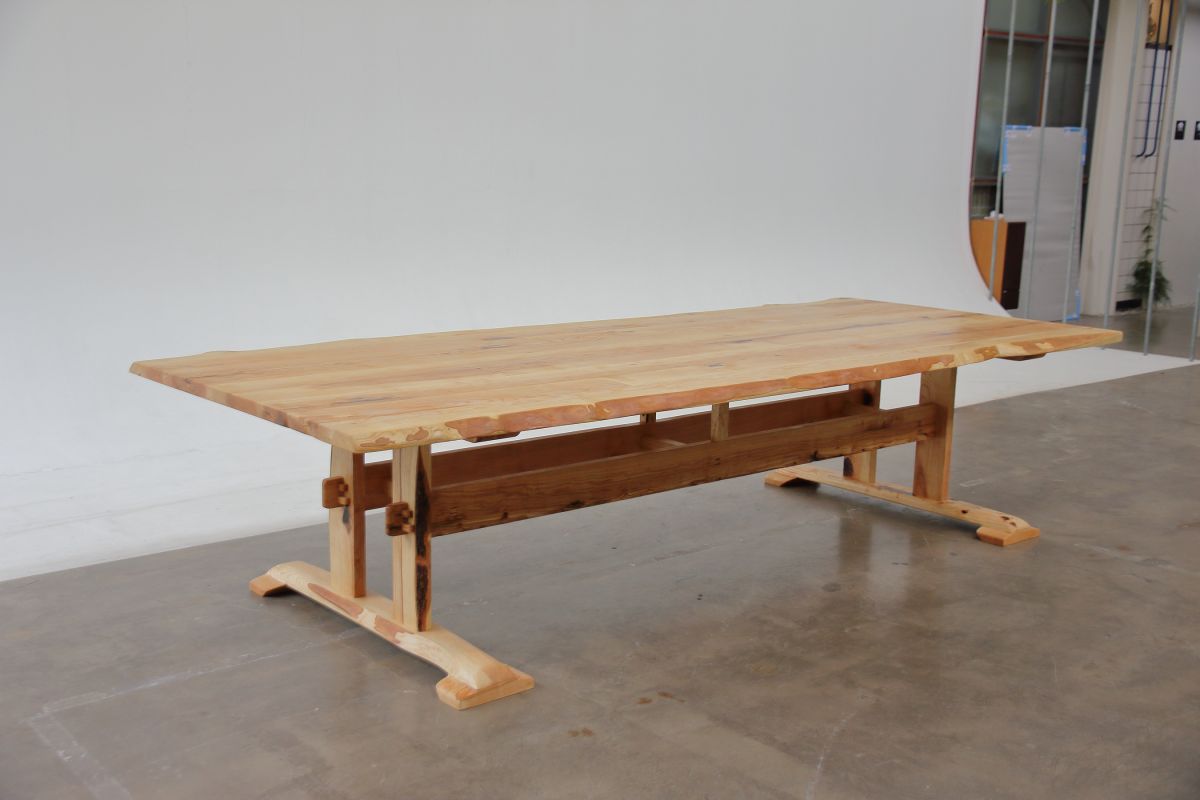 De Verandertafel is a conference table made as part of our bespoke service for Milieudefensie, an environmental NGO in the Netherlands. It is not available for purchase, but may serve as a model for a custom piece specially for you.

De Verandertafel is a big conference table that can seat up to 14 people. The table top features an exciting pattern and live edges and celebrates the beauty of the salvaged ash that was used for this table. The table base follows the trestle model and offers a solid support for the heavy table top. It is marked by the use of various versions of the mortise and tenon joint.

Milieudefensie is an environmental NGO that strives for a more sustainable, environment-friendly and fair planet and, like Atelier Espenaer, calls for changes in our production and consumption habits. Hoping that its work at this table will contribute to that effort, the table was dubbed “De Verandertafel”, which literally translates to “The Change Table”. It is also also a wink at the Dutch word for conference table: vergadertafel.

The table top of De Verandertafel has a length of 340 cm and a width of 140 cm and is created out of salvaged ash boards. Along the longitudinal edges it retains the natural shape of the tree, a feature that is commonly known as ‘live edge’. In the middle the table top measures a thickness of 4.5 cm and this gradually becomes 4 cm at the edges.

The table base follows the trestle tabel model and consists of three independent elements: two outer elements at opposite ends and a middle element in between them. The middle element fits into the outer elements with keyed through mortise and tenon joints. In each of these four joints, two keys hold the tenon tightly in place.

The two outer elements are solidly built with the two legs (the vertically positioned bars) fitting into the feet and the table top support bar via handcut through mortise and tenons. The feet are rounded to fit the fluid natural edge of the table top.

The middle element consists of two parallel rails that are connected to one another with three short bars in between them. These are joined using wedged through mortise and tenons. Halfway the rails, there is a table top support bar (meant to sustain the table top in the middle), which uses blind mortise and tenon joinery.

De Verandertafel was entirely made out of European ash salvaged from a tree that once stood in Amsterdam. This ash was acquired from Stadshout in the form of slabs of about 300 cm in length, 30-35 cm in width, and 5 cm in thickness.

Since the slabs were too warped, they were cut into narrower boards of around 15 cm width to create the table top. Given the magnitude of the project, we skipped the traditional manual tools that we normally prefer and did this part of the work with the table saw, jointer, and thickness planer. Yet the boards still needed a touch with the hand plane to get them really flat. To achieve the desired length of 340 cm and 140 cm width, the boards were joined in both lateral and longitudinal direction with simple edge joints and loose mortise and tenon joints.

To remove the bark of the boards used for the live edge, first a hatchet was used and afterwards a combination of chisels, gouges, and metal scrapers. The natural edge was fully smoothed with a power sander.

The components for the table base were cut in the same way as those for the table top, though there was also some manual sawing involved here. The various versions of the mortise and tenon joinery mentioned in the anatomy section above were all fully cut by hand using Western style chisels and the tenon saw.

The rounded legs and tenons were all handshaped using a combination of tools, including saws, bench and block planes, spoke shaves, chisels, gouges, files, metal scrapers, and sand paper.

The entire table was finished with three coats of boiled linseed oil. The table top received a coat of wax in addition.