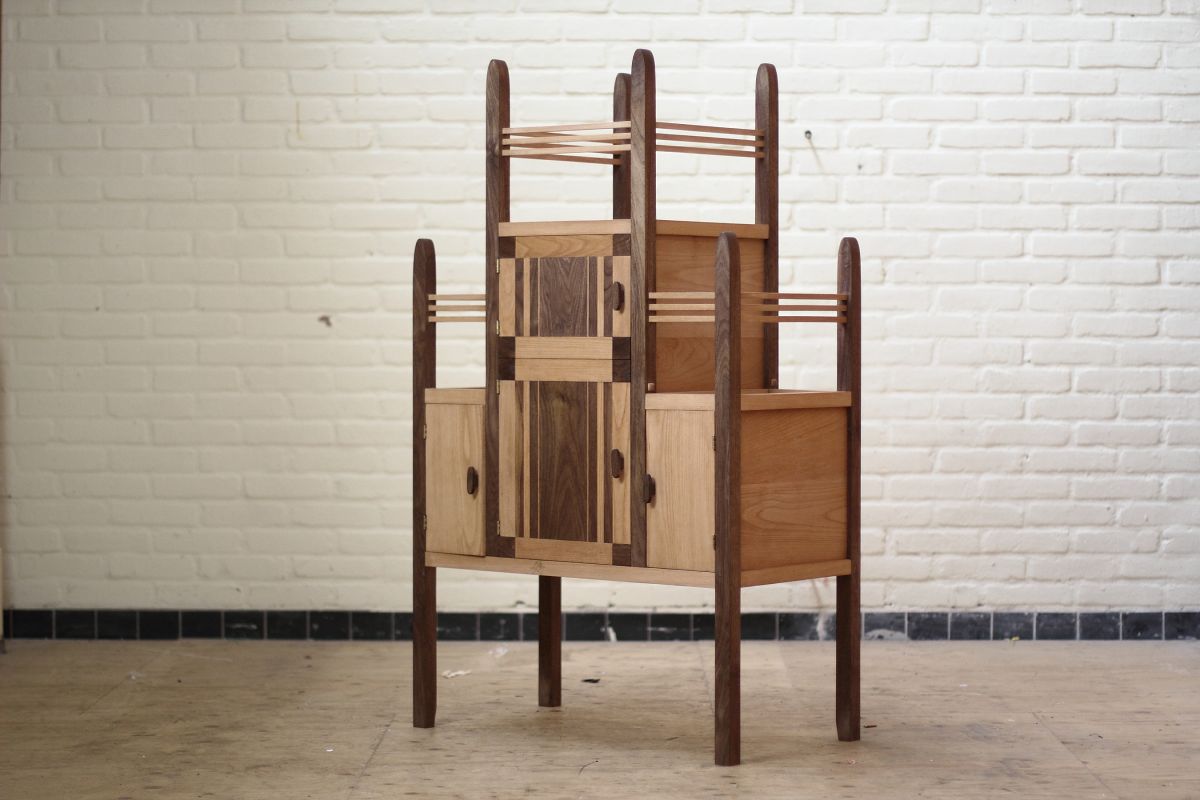 Terrassen is a medium-sized cabinet destined to become an eye-catcher in any room it is placed. Its four compartments allows for storage of a diversity of objects, from wine and liquor to books and various paraphernalia.

The ‘terraces’ on top of the cabinet are the distinguishing feature of the cabinet and give it its name; terrassen is Dutch for terraces. They may not be as impressive as the terraces of Fes, but are ideal for belongings that you wish to showcase.

Yet, the terraces are not the only distinguishing feature; equally noteworthy are the striped, alternating walnut-beech doors of the two center compartments of the cabinet.

The cabinet is peculiar for its ‘dual’ frame; the inner frame housing the two larger compartments is actually seated on a second, outer frame. The space between the inner and outer frame is filled with the smaller ‘wing’ compartments.

Both frames consist of a set of four walnut legs connected to each other with beech stretchers and rails, using closed mortise and tenon joints. Panels of solid beech sit in the frames with tongue and groove joints, which allow the wood to expand and shrink according to changing humidity levels in the room.

The terraces are formed by the simple act of letting the legs protrude the main body of the cabinet and adding rails between them at the top. The rails, consisting of three slender beech sticks, are connected to the legs with closed mortise and tenon joints.

The striped doors of the center compartments consist of alternating narrow strips of walnut and beech attached to a beautiful wider piece of walnut. Both these doors and those of the wing compartments are attached to the frame with brass hinges.

The interior of the compartments display moulding made from reclaimed fir along each face. Reclaimed fir was also used for the bottom of the cabinet and that of the upper compartment.

The legs of the inner frame have a decorative beech button, placed just above the wing compartments.

Terrassen is exclusively made using hand tools and methods. The various components of the cabinet were cut from solid walnut, beech, and fir boards with a combination of Western-style and Japanese-style saws and subsequently planed flat and smooth with Western-style hand planes of different sizes.

The many closed mortise and tenon joints in the piece were cut using a very fine Dozuki saw and a set of Western-style chisels. The tong and groove joints that make the panels fit in the frames were cut with a combination plane.

The upper ends of the legs were rounded using a combination of hand planes, files, and sanding paper.