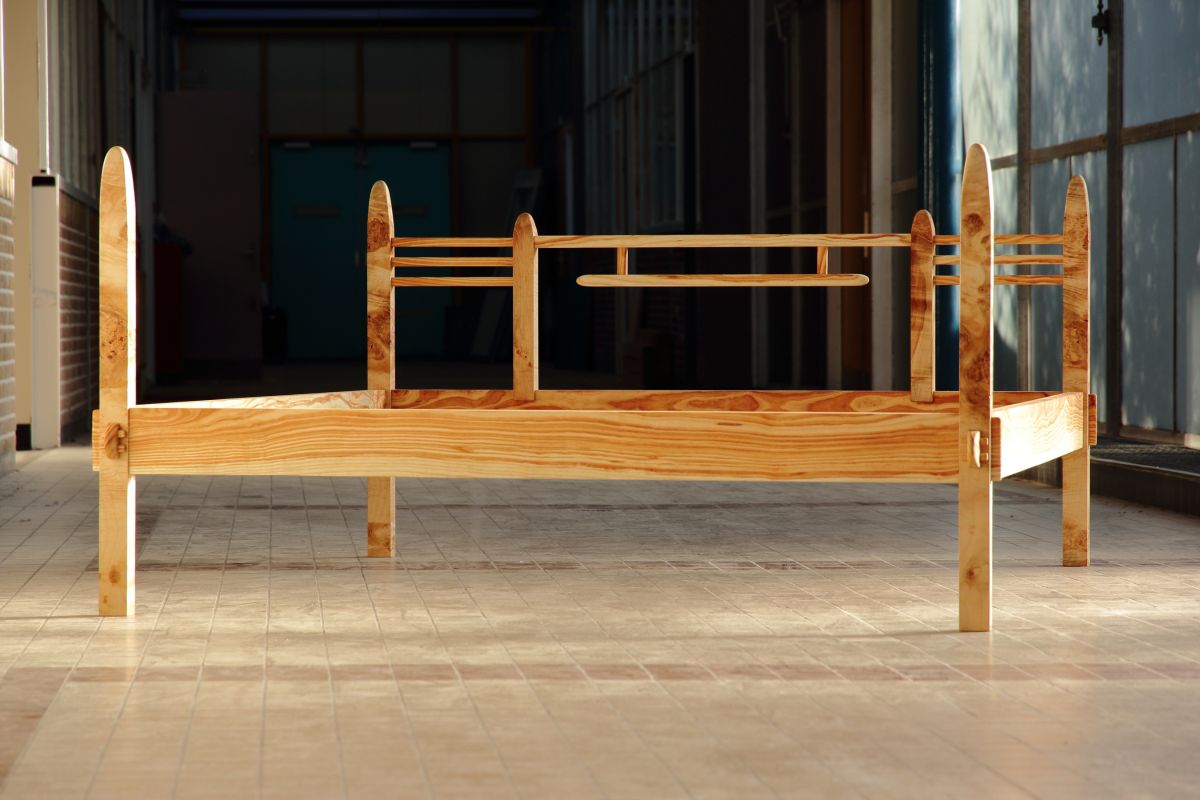 Vrede is a double bed frame specially made for a client as part of our bespoke service. It is not available for purchase, but may serve as a model for a bespoke piece specially for you. Vrede was named after the client in question.

The bed is characterized by its minimalism in both the frame and the headboard, a conscious design choice meant to create a spacious impression (or illusion, if you wil) in the relatively small bedroom it is destined for.

Vrede offers a delicate balance between design, comfort, and the practical limitations of a small Amsterdam bedroom. The foot section was left open in order to improve ease of access, since the bed was supposed to be put in a corner due to space restrictions. Yet, the bed still manages to signal its centrality in the room thanks to its beautifully handshaped peaked legs and the intricate knot figures and grain of the wood.

The bed has a minimalist frame consisting of honeylocust boards connecting to one another via four maple legs by way of an elaborate system of mortise and tenon joinery. The short rails (i.e. the rails at the head and foot sections) have tenons that go into through-mortises in the legs and are themselves mortised too. Through-tenons at the end of the long (lateral) rails pierce through both the legs and the short rails and that is in fact how the latter are kept in place. The through-tenons of the lateral rails are on their turn kept in place with a set of wedges.

The headboard consists of several parts built on the rail and leg parts at the head side, featuring typical elements of Espenaer design: the signature triplet sticks, ‘parallel legs’ (as seen in Geraamte and Allegaar), and a ‘hanging’ element (as seen in Fragiel and Geraamte) in the mid-section. The triplet sticks connect the legs to the ‘parallel legs’ through regular blind mortises. The hanging element makes use of wedged mortise and tenon joinery.

Vrede was entirely crafted by hand using traditional hand tools and techniques. The rails were cut with a Japanese ryoba saw from two boards of salvaged wood from a honeylocust tree that used to stand in the Apollolaan in the borough of Amsterdam-Zuid. The triplet sticks and the hanging mid-section in the headboard too were cut from this same wood. The legs, including the parallel legs, were cut in a similar fashion from a slab of salvaged sugar maple from that same borough. The mortises, tenons, and wedges in these components were cut using a combination of Japanese and Western-style saws and chisels.

All parts were flattened and smoothed with a combination of Western-style hand planes and metal scrapers. The legs and the through-tenons at the foot section were shaped into peaks by hand using a combination of saws, hand planes, files, and sandpaper.

The bed was finished with three layers of pure Tung oil.

Both the salvaged honeylocust and the salvaved maple were acquired from Stadshout, a local foundation that aims to give felled Amsterdam trees a second life.