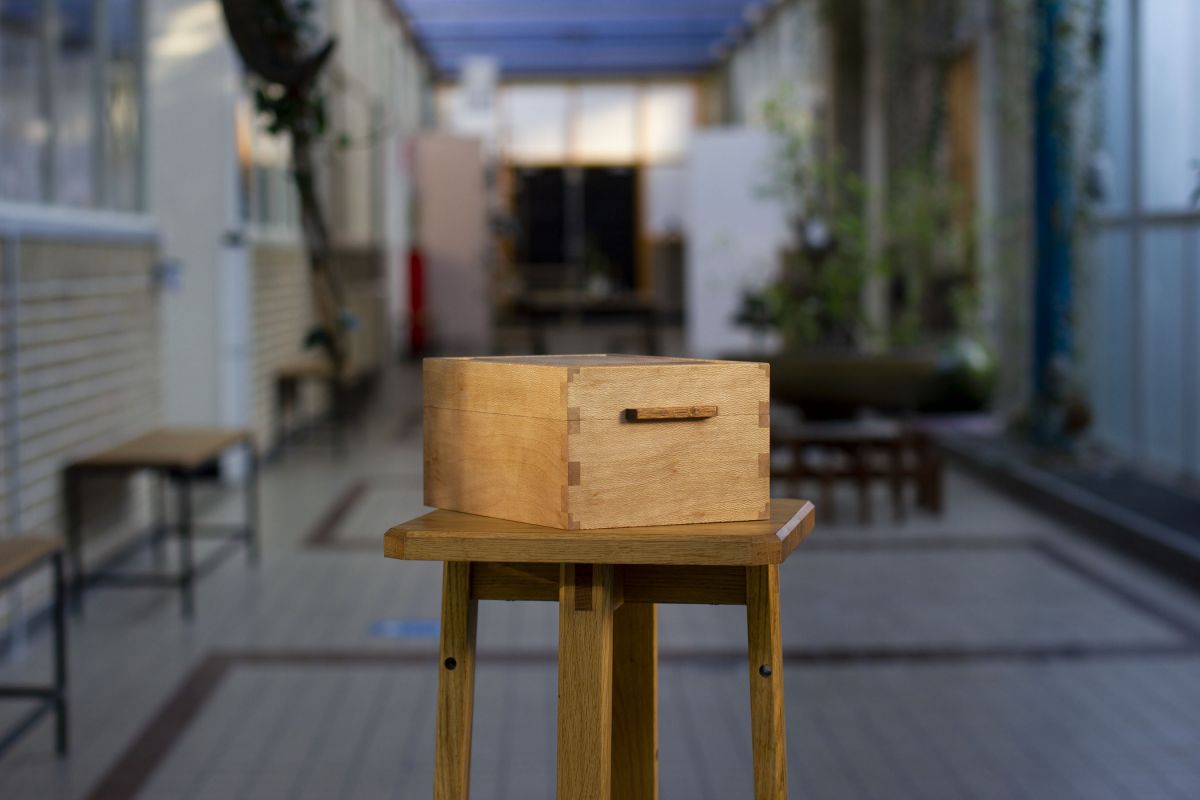 Recepten is a bespoke recipe box made for a client as part of our bespoke service. It is not available for purchase, but may serve as a model for a custom piece specially for you.

Recepten, which is Dutch for ‘recipes’, is a medium-sized box and will contain cards with hand-written recipes of the client. The lid opens along the length of the box through handmade wooden hinges.  The box has a clean design to expose the beautiful grain figure of plane, while the use of reclaimed meranti for the hinges, handle, and in the lid offers some contrast.

The box consists of two parts, the base and the lid, that are connected through wooden hinges handmade out of reclaimed meranti. The sides of both parts were cut from the same piece of plane, sometimes also known as sycamore, to ensure visual consistency between the parts when the lid is closed.

The sides of the box are joined at the corners with the box joint. The placement and size of the teeth of the joint are such that there is visual consistency between the base and the lid. The bottom and the top of the box consist of panels that fit into the sides with tongue-and-groove joints. The top panel is in fact a raised panel, with reclaimed meranti veneer around the beveled part.

A clean thin handle made out of reclaimed meranti is attached to the front of the box for comfortable opening of the lid.

Recepten was entirely crafted by hand using traditional hand tools and techniques. Both the sides and the top and bottom panels were cut from a board of plane wood with a Western-style saw and subsequently flattened and smoothened with a set of Western-style hand planes. The wooden hinges, handle, and the veneer around the raised panel were cut in a similar fashion out of pieces of meranti that was reclaimed out of the building Atelier Espenaer is located in. The plane is certified and acquired via a hardwood dealer located in our hometown Amsterdam.

The box joints were all cut by hand using a set of Western-style chisels and dovetail saws. The tongue-and-groove joints for the panels was cut with a combination plane. To create the raised panel on top, first a rabbet was created with a rabbet plane. Subsequently, a hand plane was used to create the bevels.

The wooden hinges were cut using a dovetail saw, chisel, and brace (for drilling). The round parts were rounded using sanding paper. A brass rod serves as pin and is fitted into the knuckle, joining the two leaves of the hinges.

Recepten was finished with two coats of self-made beeswax.